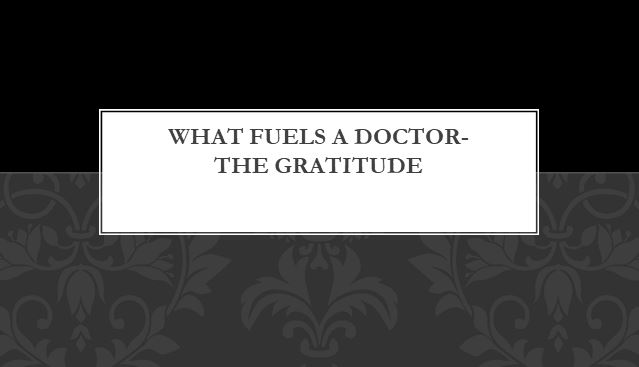 You have to live a doctor’s life or to very closely watch one’s to understand it.

As a young overburdened doctor, still undergoing the rigours of academics, I used to commit certain silly mistakes of commission and omission which my watchful patients and their attendants would easily catch. And they would gladly discount it or let me know not grudgingly. From a twenty year old boy to a fifty plus oldie – that has kept me going.

It is hard getting into medicine. Equally hard studying it and even harder practising it. The litmus test was declaring a patient dead. Even harder , declaring a neonate dead with its face beautified by the large dead pupils. As if it is going to cry just ! It takes quite some heart to do the ultimate job of declaring the undeclarable. And then you come across patients and people your age who tell you they get all sorts of symptoms upon hearing someone die !!

Doctors live fast, age fast and studies have confirmed, they die faster than the general population. Their youth is almost completely absorbed by the vast study material and rigours of one of the most difficult courses.

Once as a house physician, I encountered a school girl with fever admitted in my ward. As a routine I used to check the vitals of around 30 patients morning and evening before the rounds. She used to laugh at me saying that I had nothing better to do than a nurses’ job. It took us almost a week to diagnose her with a blood cancer. She happened to be a cousin of one of my friends. She lost her hair to chemo drugs. Tired of the disease and confines of the hospital, one evening she insisted to go out.  She was so insistent that her mother requested me if I could take her from the hospital to my room. I refused to oblige her under a veil of principles and legality. After the whole night of  confusion, whether to accede to what may be one wish in her last days, I decided to take her out of ward. I prepared  myself  for a reprimand, I would face in the department. Next morning when I reported for duty , her bed was empty. She had massive bleed at night. I cried. That was about 25 years back. I still cry though very sparingly now, on losing a patient.

Only a doctor would understand this.

Looking back , it is not money , it is not anything but a glint of gratefulness in the eyes of my patients and it is the tolerance of my patients to my mistakes that has kept me going all these years. But that desired emotions are lacking somewhere and myself, at times do not feel the zeal  to continue anymore.

A sense of gratitude in the  eyes of patients that fueled the doctor inside me,  is no more visible now.