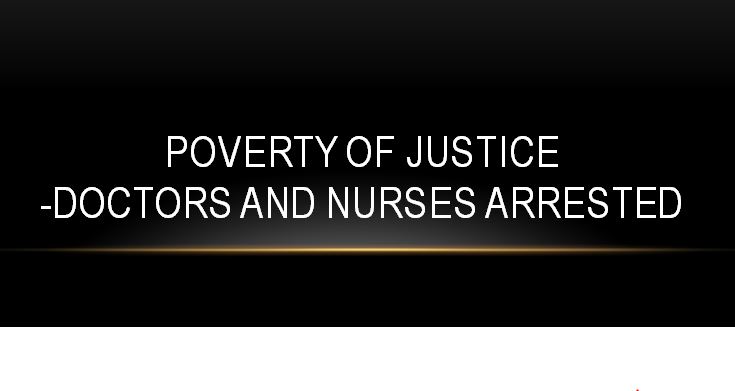 In present era,  Doctors and Nurses have become sitting ducks for assaults, punishments and harassment for every reason, inept medical system, whether right or wrong.  An unfortunate example of  not only  plight  of  health care workers but the strange kind of governance, is the  arrest of doctor and nurses  at  Ahmed Nagar -Pune blaming them for fire in the hospital.  Strangely, the administrators and staff responsible for the maintenance and infrastructure safety are not in the picture.

Making health care workers scapegoats for such tragedies just reflects not only the inept governance and poverty of justice but also the callous attitude of authorities  towards real issues.

A medical officer and three staff nurses were arrested Tuesday on charges of causing death by negligence and culpable homicide not amounting to murder after 11 people lost their lives last week in a fire incident at a hospital in Maharashtra’s Ahmednagar district. Medical officer Dr Vishakha Shinde, and staff nurses Sapna Pathare, Asma Shaikh and Channa Anant were arrested under sections 304 and 304A of the Indian Penal Code (IPC), said Manoj Patil, Superintendent of Police, Ahmednagar rural police.

Quoting Ahmednagar police, HT earlier reported that 70% of deaths were caused by smoke from the fire while the remaining died after directly getting caught in the blaze that broke out in the Intensive Care Unit (ICU) of the Civil Hospital. Most of them were senior citizens undergoing treatment for coronavirus disease (Covid-19). In connection with the incident, an FIR was registered against unidentified persons under Section 304(A) of the IPC.

The fire broke out last Saturday at 11am on the ground floor of the hospital, where 17 patients were admitted, of which 15 were on either ventilator or oxygen support. While 10 patients died in the blaze at the spot, one person later succumbed to injuries.

Alleging that the State Government was attempting to shift the blame on personnel on the ground after the tragedy, the protesting members of the medical fraternity blamed the Government for negligence in not conducting regular fire audits, while claiming that the District Civil Surgeon, who was recently suspended, had sought State funds to set up a fire safety system, none were forthcoming from the administration.

Dr. Anil Athare, president, IMA, Ahmednagar said it was shocking that clauses of Section 304 and 304A were applied against the medical officer and the three nurses, remarking that doctors and nurses were “always made scapegoats” in such cases.

“Instead of accusing the medical staff on ground, why is anyone not questioning the officials of the Public Works Department (PWD) and Electrical Department regarding wiring and maintenance works which caused the fire in the first place,” said Dr. Athare, demanding that the arrested medical personnel be released immediately.