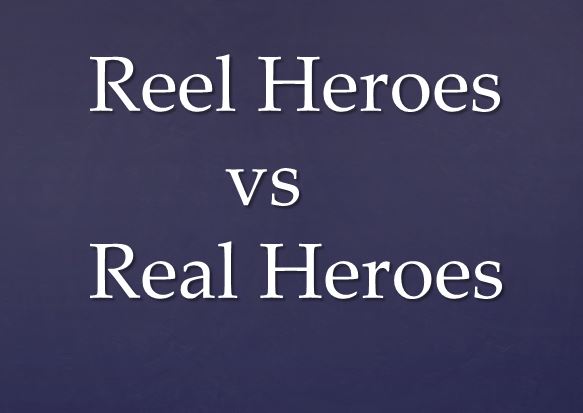 In the current era of media domination where media projection shapes the perception and may defy reality.  Media has dominated our lives and can sway the opinion formation of masses.  Written media, television, social media can collectively influence the mass opinion.

A reel hero who acts like a soldier is famous and richer and than the actual soldier, who dies unnamed and in penury.   Children of today’s times will strive to become, who is worshiped and paid respect by society and therefore will prefer to become the ‘Reel heroes’.

Even a junior doctor saves many lives in a  day in emergencies as compared to the work of a superstar in films.  A teacher, nurse or scientist have a contribution which is more fruitful to our generation. Also, the scientists, who contribute immensely and bring about the real change in our lives. Their contribution is huge to our society and much more than doing just acting on screen. The reel actor merely imitates the real-life lived and actual work done by real heroes like a soldier, doctor or teacher. Someone who only acts and  behaves like one, is respected and paid thousand times or more than the real one. In reality, people need  more than mere entertainment and reel role models and actors in their real lives.

A  society truly needs the real people, who work and act for them, more than just entertainment. It will need a total change in the attitude of people to deconstruct their perceptions, which are based on mere projections and are away from reality.

21 occupational risk to doctor and nurses

The naivety of masses to perceive the projected character as real one  goes beyond a reasonable thought process and imagination.

These roles played in films are  not  really acts of   inspiration  in real life as the actual purpose accomplished at the end of a movie  is entertainment of society and business for themselves.

At the best, a particular projected character  (and not individual acting star) may be a  role model. An actor or superstar, is simply doing his work of “acting” in  the end. This work of acting may bring an entertainment of few hours at the most.

One  cannot stray away from the wisdom to  choose between what we consume merely for our entertainment and  what we believe or face in real life. One needs to differentiate between rational truth behind the celebrity gimmicks in the media and exaggerated sensationalism. Sensation created merely for a commercial successful venture should not be allowed to overpower the judgments of real life.

But the problem starts, when these false perceptions created merely   by a projected  glimmer    takes the shimmer  away from the real worthy. The real  professionals and people who are worthy of glory become invisible behind  the glittery mist, a haze, which is unreal and unhelpful in real life.

Compare the trivial  amount of  remuneration, fame  and respect the real worker  gets  as compared to the film stars, who merely imitate their actions. Reel projection for the purpose  of entertainment is more easier to enact and more profitable  than actual performance  in real life.  It is easier to become a reel hero, as it requires little hard work or just connections to get an opportunity.  Some one can be a reel hero just  by  dynastic factor  easily. Hard work is definitely required but that may or may not be prerequisite.

In present era, real contributions by people, who are saviours of human life and  the real heroes, remain unappreciated. People are so besotted by  fame and money that they fail to appreciate the sacrifices made by real heroes. Filmy super hero  just imitates  a doctor, soldier,  dacoit or a street hooligan and just pretends to be one on the screen.

But there are  real life heroes that exist around us. Doctors awake at night saving lives every minute or soldier in freezing cold are worthy  of more respect and are real heroes.  And it is up to the society  to look beyond the superficial and reel story, and focus on the real life actors. There has to be an true effort to make, respect and appreciate  real heroes.

Point to  ponder  is that whether society needs people  just  acting like   doctors,  soldiers  and not the  actual and real ones, who saves lives. Does Society need  only  entertainment, because respect  which is paid to someone who is  just  an   actor, is  not extended to real doctors, soldiers or other altruistic professions.

It is time to recreate and worship real heroes, who have become invisible behind the glittery mist.

Society needs to envisage the bigger real picture, and should not be mistaken for another projected story.

The perception of the projection will decide, what does the   society actually  need- or desire-or deserve , “Reel Heroes or Real Heroes”.

5 thoughts on “#Nurse/doctor/soldier vs Filmy superstar: Reel Heroes or Real Heroes. what does the society Need/deserve?”