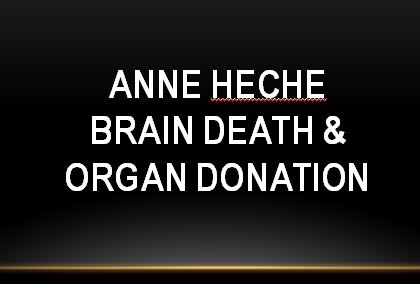 Anne Heche, 53, had spent several days in a coma at the Grossman Burn Center at West Hills (California) Hospital and Medical Center after her Mini Cooper ran off the road Aug. 5 and smashed  into a two-story home.

On Friday-  Anne Heche  (Hollywood actress ) had been declared brain dead, although she remained on life support for organ donation, a rep for the actress told  The Hollywood Reporter  on Friday. According to the actress’ publicist Holly Baird, Heche is “legally dead according to California law.” However, her heart is still beating and she has not been taken off of life support so that “OneLegacy can see if she is a match for organ donation.”

The actress’ team had previously shared an update on her health Thursday, stating that she suffered a severe anoxic brain injury and wasn’t expected to survive following an Aug. 5  car crash.

According to Baird, the star had been hospitalized in a coma and in critical condition since the accident. The actress crashed her car into a two-story home in L.A.’s Mar Vista neighborhood, sparking a fire, according to a Los Angeles Fire Department report.

In the statement Thursday from Heche’s rep, it “has long been her choice to donate her organs” and she was being kept on life support to determine whether her organs were viable.

The shortage of organs is virtually a universal problem but Asia lags behind much of the rest of the world. India lags far behind other countries even in Asia.  It is not that there aren’t enough organs to transplant. Nearly every person who dies naturally, or in an accident, is a potential donor. Even then, innumerable patients cannot find a donor.

Situation of shortage of organs in India

There is a wide gap between patients who need transplants and the organs that are available in India. An estimated around 1.8 lakh persons suffer from renal failure every year, however the number of renal transplants done is around 6000 only. An estimated 2 lac patients die of liver failure or liver cancer annually in India, about 10-15% of which can be saved with a timely liver transplant. Hence about 25-30 thousand liver transplants are needed annually in India but only about one thousand five hundred are being performed. Similarly about 50000 persons suffer from Heart failures annually but only about 10 to 15 heart transplants are performed every year in India.  In case of Cornea, about 25000 transplants are done every year against a requirement of 1 lakh.

The legal Framework in India

Transplantation of Human Organs Act (THOA) 1994 was enacted to provide a system of removal, storage and transplantation of human organs for therapeutic purposes and for the prevention of commercial dealings in human organs. THOA is now adopted by all States except Andhra and J&K, who have their own similar laws. Under THOA, source of the organ may be:

Brain Stem death is recognized as a legal death in India under the Transplantation of Human Organs Act, like many other countries, which has revolutionized the concept of organ donation after death. After natural cardiac death only a few organs/tissues can be donated (like cornea, bone, skin and blood vessels) whereas after brain stem death almost 37 different organs and tissues can be donated including vital organs such as kidneys, heart, liver and lungs.

Despite a facilitatory law, organ donation from deceased persons continues to be very poor. In India there is a need to promote deceased organ donation as donation from living persons cannot take care of the organ requirement of the country. Also there is risk to the living donor and proper follow up of donor is also required. There is also an element of commercial transaction associated with living organ donation, which is violation of Law. In such a situation of organ shortage, rich can exploit the poor by indulging in organ trading.

In pursuance to the amendment Act, Transplantation of Human Organs and Tissues Rules 2014 have been notified on 27-3-2014

Directorate General of Health Services, Government of India is implementing National Organ Transplant Programme for carrying out the activities as per amendment Act, training of manpower and promotion organ donation from deceased persons.

National Organ Transplant Programme with a budget of Rs. 149.5 Crore for 12th Five year Plan aims to improve access to the life transforming transplantation for needy citizens of our country by promoting deceased organ donation.

National Network division of NOTTO would function as apex centre for all India activities of coordination and networking for procurement and distribution of organs and tissues and registry of Organs and Tissues Donation and Transplantation in country. The following activities would be undertaken to facilitate Organ Transplantation in safest way in shortest possible time and to collect data and develop and publish National registry.

For Delhi and NCR

It is envisaged to make 5 SOTTOs in new AIIMS like institutions.

A website by the name www.notto.nic.in has been hosted where information with regards to the organ transplantation can be obtained. An online system through website is being developed for establishing network for Removal and Storage of Organs and Tissues from deceased donors and their allocation and distribution in a transparent manner. A computerized system of State/Regional and National Registry of donors and recipients is also going to be put in place.

Expensive Medical College  seat- Is it worth it?