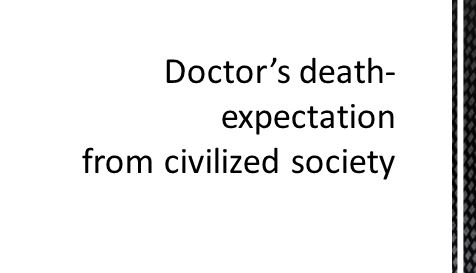 In an era, where Reel Heroes are worshipped and Real Heroes are not    counted even after sacrificing their lives, is an unfortunate  and disheartening for  the whole community of doctors and nurses. It is surprising that  doctors, who saved uncountable lives, did not move the administrators enough  to get them counted.  Such  incidents  are not only  painful to the medical fraternity but also expose the hypocritical  attitude of the administrators as well as  the insensitive approach of society towards health care workers, although everyone expects doctors and nurses to be sensitive towards everyone else. Such indifferent   attitude demoralizes and causes deep discouragement to the front line doctor and nurses, but sadly remains a routine business for administrators. The pain of being  treated like a dispensable disposable remains as  a deep hurt within.

But at the same time, mere tokenism as an expression of concern is also not desirable. What is really required is a sincere effort to reduce the mortality of health care workers, to provide them better working conditions. An honest effort to find the cause of mortality among doctors and reducing it, help to the families of the health care workers is required. Due acknowledgement and true  respect to their sacrifice  is expected from civilized society.

Indian Medical Association has shown its displeasure over  the Government  statement on coronavirus in parliament, which had no word on the doctors who died in the line of duty, and the  statement that the Centre had no data as health is a state subject.  Accusing the government of “indifference”, “abdication” and “abandonment of heroes”, the country’s top body of medical practitioners said in such a circumstance, the government “loses the moral authority to administer the Epidemic Act 1897 and the Disaster Management Act”.

So far, 382 doctors have died of coronavirus, the IMA said. In the list it released, the youngest doctor to lose his life was 27 years old and the oldest was 85.

But while acknowledging the contribution of healthcare workers during the pandemic, the health minister made no mention of the medical professionals lost to the disease, the IMA said.

“To feign that this information doesn’t merit the attention of the nation is abominable,” the IMA statement read. “It appears that they are dispensable. No nation has lost as many doctors and health care workers like India,” the statement added.

The IMA pointed to Union minister Ashwini Kumar Choubey’s statement that the Union government does not have any compensation data as public health and hospitals comes under the states.

“This amounts to abdication of duty and abandonment of the national heroes who have stood up for our people. IMA finds it strange that after having formulated an unfriendly partial insurance scheme for the bereaved families to struggle with the ignominy of the Government disowning them altogether stares at them,” the statement read.

Such a circumstance also exposes the “hypocrisy of calling them corona warriors on one hand and denying them and their families the status and benefits of martyrdom,” the IMA said.

25 factors, why medical treatments are expensive

Pros-cons of being a doctor